Are you doing DIY wedding invitations? Looking for beautiful, free script fonts because you can’t afford to shell out $100 for Burgues Script or Bickham Script Pro? Whether you’re printing your invites at home, or getting your own design professionally printed by someone like Zazzle, you’ll want a beautiful script font, and I’ve got you covered! Since you’ll be using the fonts for your own personal use, you won’t need to buy a commercial license and hence, you’ve got a wide range of free fonts to choose from!

Here’s a selection of the best, currently-available free wedding script fonts that I know about. I tried to stay away from well-known, old standards like Scriptina and Chopin Script, and instead include some newer fonts that really deserve more of a spotlight, like Cylburn and Sacramento. Because 20 fonts is a lot to take in, I grouped them by styles: Classic and elegant script, swirly script, stylish and chic handwriting, simple and sweet handwriting, and finally, vintage script.

(Scroll down to see descriptions and download links for each font.) 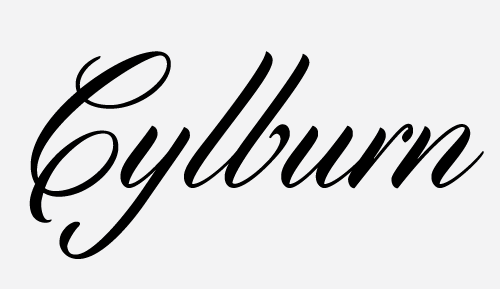 Cylburn is probably my personal favorite on this list – it’s certainly one of the most elegant and highest-quality. It’s so fluid and calligraphic without being too brushtrokey. It’s offered by the Lost Type Foundry, which has a pay-what-you-want model – any font they have, you can just enter $0 for a free download (or, you can donate whatever you can afford and think the font is worth). Graceful and refined, Cylburn is a semi-connected script with an understated elegance.

Italianno’s elegance is a restrained, refined sort. This versatile script font would be excellent for use in formal, classic invitations, but also perfectly at home in modern, contemporary styles of wedding invitations with its strong angles and no-frills style.

I know, I said I’d stay away from old classics, but I do love Kunstler Script. It’s a classic script font, but it’s got this unique delicate feel to it. I also love the little balls at the ends of the letters (I am sure there is a formal typographic term for this, but I don’t know it and googling “little balls on the end of script letters” certainly isn’t helping!).

Exmouth is another great classic font. With thicker strokes, it’s a bit easier to read than Kunstler Script, but it’s very much in the same style – just a simple, elegant script font that you can’t go wrong with.

If you want an otherwise simple, elegant script font with curly capital letters, La Jolla is a good way to go. I can’t deny that I love some nice, old-fashioned swirls and flourishes – if you do too, you might want to consider La Jolla.

Wow – look at those swooshes. Is it just me or does this font have a hint of swashbuckle to it? Well, nevermind – here’s an old-fashioned font with plenty of capital-letter swirls to go around. You know, if you like that sort of thing. (I do!) By the way, these extreme flourishes are dangerous – don’t overuse this font! Try to limit it to your names, or place names like your venue or city.

Our first entry in the Janda family tonight (stay tuned for Janda Stylish at #11), this font has tons of thin little flourishes coming off every letter. If you want a really festive, exciting look this might be a good idea. But for most people, this font might be a bit too much – but personally, I think it would look great as a cute, handwritten swirly monogram! Respective is great if you want to add a little flourish, but don’t want to go as extreme as Janda Celebration or Some Weatz. Its flourishes are elegant and intricate, but at the same time there’s a little bit of attitude there with the confident swirls and oversized capital letters – it’s a beautifully stylish script font that nevertheless demands attention and yes, respect.

Oh, I love this one. And not just for the name, which I find fantastic. Sudtipos, creators of the famous Burgues and more recently, Bellissima Scripts, have released a series of fonts based on capturing the handwriting personality of actual people. This one happens to be free! Not only does it have tons of character, I think it’s super chic – an energetic alternative to standard, elegant script fonts. It would also go really well with a Victorian or steampunk design.

This super simple script font is effortlessly glamorous in its easy, artsy strokes. It’s casual but not too casual, and it would look fantastic on a beach or destination wedding invitation.

Janda Stylish is just the kind of casual-chic handwriting font that’s so trendy lately. Like a less leggy version of the (non-free but fab) Bombshell Pro, it manages the delicate balancing act between cuteness and sophistication with aplomb.

Now this is script with attitude! The easy, looping curves contrast with the sharp, pointy downswings on letters like “g” and “p” to create an unconcerned, but spunky look. This is a great script font on its own, but it would be perfectly at home in wedding invitations with an offbeat, punk vibe. There’s also a “decorated” version – so you can add as many swashbuckling flourishes as you like!

I love the sweet simplicity of this font! Not only would it be ideal for teaching cursive to elementary school kids, it would also look perfectly adorable and sweet on a handmade, playful and cute wedding invitation.

Dancing Script is by now a popular free script font – and for good reason! It’s an easy, simple font that’s easy to read and looks nice but not stuffy.

I love this roundhand script, which somehow has a very feminine kind of grace to it. It’s casual but it isn’t cutesy – making it a versatile font for use in invitation styles ranging from classic to whimsical.

“Great Vibes” is an auspicious name for a font, but this one lives up to it! It has an inviting irregularity to it, and has a little more of an edge to it than the other fonts in the simple handwriting category, which makes it all the more intriguing.

Another great script font from the Lost Type Foundry is Lavanderia, a professionally designed, very modern looking script inspired by the vintage typography of a laundromat (hence the name). If you’ve got access to a fancy program like Adobe Illustrator or InDesign, you can even use alternate characters and ligatures. It also comes in three different weights – delicate (shown above), regular (shown in chalkboard illustration), and sturdy. Mixing weights of the same font is an easy way to get a chic and designery look.

This font has so much personality. It’s definitely got a monoline script, 50s vibe to it, but the stylishly oversized capital letters keep it up-to-date. It would be perfect on a vintage style invitation, but I think it’s chic and elegant enough to look fabulous in any context.

This is one bold font! Definitely not for the faint of heart, this script will make a statement. It’s artsy with a touch of vintage – and looks very calligraphic when used on more than a word or two.

Last but not least, we’ve got another goody from the Lost Type Foundry. It’s another bold, calligraphic font, but much softer around the edges than Channel – more flowy than bouncy.

Well, I hope you enjoyed the free wedding font round-up! I know I focused only on script fonts, but for me, if you’re using a script font at all that usually makes it or breaks it. Serif and sans-serif fonts certainly have their place, but it’s easy to go with something safe and basic there – it’s much harder to find a fabulous and perfect script! I know these fonts won’t be everyone’s cup of tea so here’s a few more links where you can browse all the free fonty goodies your heart desires:

FontSpace also has loads of free fonts – they’re not always good, but you’re sure to find some hidden gems if you’re willing to comb through lots of fonts!

My Fonts mostly offers pay fonts, but they have an unparalleled selection, and many of the fonts won’t break the bank. (But before you buy it at My Fonts, you may be able to find it available for free personal use at FontSpace – try googling to check, or searching FontSpace!).

The Lost Type Foundry has a smaller selection, but high quality fonts available on a donation basis (you choose what you pay).

The League of Movable Type is another great source of free fonts – not very many script fonts, but they have some great serif and sans-serif, and titling options.

Have any questions? Don’t hesitate to ask!

What kind of script are you?

Personally, I’m pretty firmly straddling the elegant/classic and swirly script categories – but I very much enjoy my forays into more casual, handwriting looks as well. What kind of script fonts do you like? Which was your favorite of my top 20?

Please note: This sidebar contains affiliate links. We only link to vendors we trust!